The other day I was driving our truck on the way to pick up Kristen from work. Megan and Paul were in a mood and bickering in the backseat. Among other things Megan was kicking the front seat, annoying my passenger while laughing when I told her to stop. Dave, our house guest, was being good in the front with me.

In a moment of sheer evil I piped up over the bickering and told the kids a story. “Hey guys, did daddy ever tell you about our other daughter?” Dead silence filled the car. “Yeah, she came before you Megan. (7 years old) One day we were driving along and she was being naughty. She wouldn’t stop kicking mommy’s seat and she wouldn’t listen to daddy when he told her to stop. So daddy stopped the car and left her on the side of the road. Then we had you two. You wouldn’t want to be like Tammy, would you?”

There are a few moments in parenting when you’re certain you’ve said something that your kids will spend their twenties telling a counselor about. This was one of them.

Thankfully Megan saw right through it. So did Paul. (5 years old.) Megan said, “Daddy, that’s not true. You’re just trying to get us to stop being bad.” Paul chimed in, “Tammy isn’t real.” [pause] “Is she?”

Laughter filled the cab and Dave exhaled loudly. He couldn’t believe I’d made up such a horrible tale!

I think Tammy may be around for a while too. Tonight, as Kristen was putting the kids to bed and reading about Joseph, Megan had an aha moment. “So Joseph was kind of like Tammy, right? An annoying member of the family that everyone wanted to get rid of?” Kristen somehow kept it together and agreed with her.

Then, as Kristen climbed out of Megan’s bed, my little girl had to get the last word.

Megan: “Why did Tammy cross the highway?”

Megan: “To get to the other side after daddy left her.”

I never claimed to be parent of the year.

You know I think this is funny when I show a Martha Stewart clip on my blog. I can’t stand Martha… but I do like Snoop Dogg. (Dee-o-double-gee) 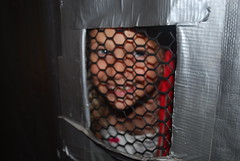 My oldest daughter, Megan, is just like her mommy. Besides being endlessly sassy, sarcastic, and competitive… Megan is a hard core learner.

Her latest weakness is reading long chapter books. We will send her to bed at 8:30, but she’ll stay up super late enraptured by her latest book. And just like her mommy, it’s all top secret.

It’s impossible for me to get angry with a little girl wanting to expand her imagination. Dream big girl.