How would your life be different if you spent 10 minutes of every day slowing down enough to see the beauty around you?

This is what I saw as I walked around, listening to the birds, hearing myself breathe, sipped my tea, and spent 10 minutes in silence yesterday.

We are getting about 25-30 red tomatoes this size per week right now. This has Kristen making lots of bruchetta and salads and anything else with tomatoes. We love it! 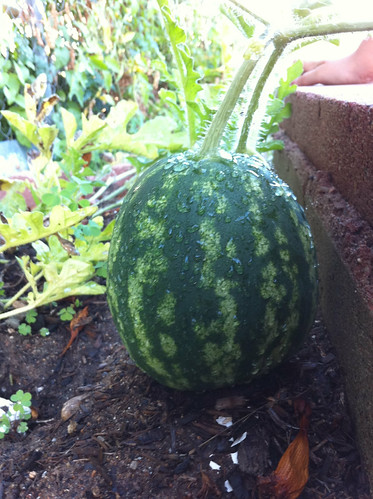 There’s lots of fun stuff happening in our garden. Watermelon are coming in strong. And we’re hoping to pick a big batch of jalapeño this weekend. Right behind that are a whole heap of eggplant.

Our little garden experiment is going quite well. Thanks to all who encourage us.

Note: This was my first iPhone movie. Stupid me didn’t use the HD end of the camera. Sorry about that!

Here are a few more pictures I shot this evening. Our backyard organic garden experiment started about 6 months ago. Way back in January we had no idea that by July we would have a wide variety of vegetables. But the picture above shows what our normal biweekly harvest now looks like. On top of that,  herbs, summer squash, eggplant, jalapeño, and the occasional strawberry.

Our 2010 goal is to allocate 20% of our food to come from local sources. I don’t know exactly how we are going to measure that! But between what we are growing in our yard and our CSA box from J.R. Organics we have pretty much eliminated the produce area of the grocery store. (Things like bananas and potatoes seem to be the hardest to replace locally.)

Lots of success, some failures

We’ve done pretty good for first year gardeners. But we have had some failures too. We planted the summer squash, acorn squash, and cucumbers way too close together. This caused the acorn squash to never fully develop and we had to pull that out last week. Our sweet corn was doing very well but suddenly stopped growing and produced only a few kernels on each ear. We planted garlic at the wrong time of year. So it’s still green but hasn’t done anything. We have one tomato plant which has taken over the tomato and strawberry area. It’s been fun to see the plant grow about 15 feet tall… but it’s also kept two other varieties of tomatoes from developing fully.

Watering schedules and bugs are still ever-present issues. And our worm composting… still just going so-so. Weeds and snails were a problem in the Spring, but with the drying out of the climate both have stopped.

Out with the old

With Kristen and I leaving the country in 7 days, we’re going to do a little garden maintenance this weekend. We’ll pull out the sweet corn, trim the summer squash way back, and eliminate a couple herbs which aren’t doing so well. I’ll also spread some organic fertilizer. (Very expensive fish poop!)

The cool thing about San Diego is that our growing season essentially never stops. So we’ll pull out some of those things and head over to the nursery to scout out what will take its place. We’re hoping to get one more summer harvest in before we have to think about fall plantings.

Megan and Paul have been involved since day 1. Each day, Megan and I take a garden tour where we carefully inspect the progress of every plant. As the months have passed we’ve started to talk about the kids taking ownership of an area of the garden. So we are trying to figure out how to make that happen.

Kristen and I are now 5 months into our experiment. Our goal is to grow or purchase 25% of our food locally in 2010. So far, it’s been a fun experiment! And in the process we’ve found a hobby that the whole family can participate in.

One thing that has been incredibly satisfying is knowing that we aren’t the only family on this journey. I’ve met a number of co-workers, friends, and youth workers who are leading their families on similar experiments.

It’s been super encouraging and satisfying to discover that you don’t have to have a lot of acreage to feed your family. In fact, we’re pretty confident that if we keep improving the soil quality, expand to just a few more planting beds, and a few more seasons of experience under our belts, that we can actually produce much more than 50% of our families produce right here in the city. (Thank God for a landlord who loves gardening!)

Here are two bits of inspiration for Kristen and I. One of which we discovered months ago while the other we only discovered this weekend.

City Farmers Nursery This place is legendary in San Diego. A massive organic nursery in the heart of City Heights (aka, the hood) Path to Freedom One families attempt to live off the land in the city of Pasadena. Now they are launching a movement the are calling, Urban Homesteading. Here’s a rundown of what is growing in our garden right now:

What’s really crazy is that this probably only takes up 20% of our backyard. Here are some things we want to add in the next year: 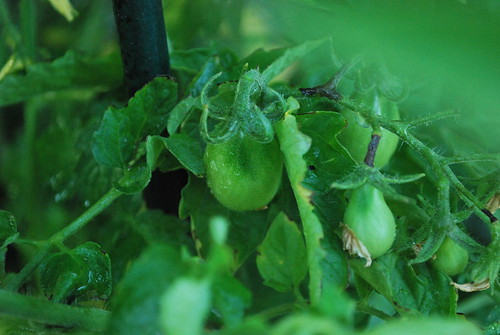 Yesterday Paul and I were doing our daily look through the garden. He leaned in and yelled, “Daddy, check this out! We’ve got lots of tomatoes!”

In just a couple of weeks all of our summer garden plants will mature and start producing produce. We can’t wait!

We are new gardeners. Our insane 2010 goal of either growing or buying 25% of our families food from a local farmers market has pushed us into a crash course in agriculture.

In March and April we planted our second season of vegetables as well as double the amount of property dedicated to veggies. It’s out-of-control in a very fun way!

Along the way we’ve been learning some valuable lessons. Interestingly, these lessons have fantastic spiritual significance as well. Our little backyard garden got some love from the KPBS website today. You know… we are garden celebrities now.

25% of our food in 2010 will come from our own garden or organically produced sources. That’s the goal. Anyone know where I can buy a Snickers tree?