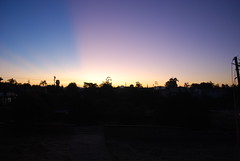 Because of the marine layer, we don’t get many sunrises in San Diego. When I looked out of my bedroom window and saw this today I had two thoughts. First, I need to capture this moment on film! Second, it’s going to be a hot one. No marine layer also means that it’s going to get super hot.

Sometimes good weekends come unexpectedly. This past weekend was one of them.

Coming into the weekend was cool because I am finally feeling good about my Monday-Friday workload. The first few weeks after YS’s re-organization I just had a hard time relaxing. There was so much to do! (Or so it felt) A lot of that has settled into routine so I can really, truly, chill on weekends.

Friday afternoon I took advantage of a whole in my schedule and took Kristen on a little mid-afternoon date. We went to a little beach bar for some pub grub and took a walk on the beach. It was the perfect way to kick things off even though we had to cut it short so I could get back to work and Kristen could get the kids from school.

Saturday morning Kristen got up at the buttcrack of dawn and climbed Cowles Mountain. This is an important part of her weekend routine. When she came back Paul and I took the dog to Ocean Beach for a little chase the ball and Stoney sniff butt time. Dog pack rules are fascinating to me, but that’s for another post. After we had been at the beach for a while I got a call from Mandy, who is new to YS and lives in the Ocean Beach neighborhood. She and her husband, Jon, came over for a while and we caught up while Paul built the Great Wall of China. An amazing feat.

After the beach trip we came home and I fell asleep watching golf on TV. About an hour and a half later Paul jumped on me and said, “Let’s go to the beach!” Since it was a perfect weather day I couldn’t resist that. Really, we went to the beach and frolicked in the sand to honor our friends who were shovelling snow, sandbagging, or otherwise being tortured by an early Spring blast of cold weather. We splashed around Coronado beach for a few hours. The kids played in the sand while Kristen and I waded up to our ankles in the cold water looking for sand dollars. We came home, got some carry out from a taco shop, and everyone crashed before 9 PM.

Sunday continued the fun. We did our normal donut routine in the morning, headed to church, and came home for lunch. After lunch we went to the Rolando Village street fair and got a better feel for our neighborhood. When the kids had eaten too much cotton candy and mom/dad had seen all the crafts, we headed home.

From there, I took off to meet-up with Dave from work. Dave had arranged for us to do a podcast shoot with the guys from Family Force 5 before their San Diego show at the House of Blues. That was a blast, I got some cool footage of the band. What they had to say was a little bit goofy, but a lot important to youth workers. Later, we headed over to the show. I’m used to Christian shows… so this one was a bit wilder than I expected. About 1000 screaming and sweaty high school kids, mostly girls, filled the club for the 5 act show. We got there for the 2nd act, The Maine. They were good… clearly I’m old since I have no clue who they are. But they had a fun sound. It always cracks me up that high school kids can’t remember to do their homework but know every word to every song. If it weren’t for the annoying habit of them walking up to a mic and just saying random cuss words between songs… I probably would have liked them more. “S**t yeah. How are you mother F**kers, tonight?” Again, showing my age. After a little swap out of equipment, Family Force 5 took the stage. If you’ve never seen them, they have an incredible energy. I was given a photo badge so I could take some shots for the bands DCLA appearance. As I snapped pictures stageside I could literally “feel the heat” from the crowd who was mashed up against the barriers. I’ve seen them perform before in Christian venues… same songs, same intensity, ten times the energy. Dancing, bouncing, screaming the words. Makes a geek like me wish I had chosen to be a rock star. This band will light up the stage in DC this July.

After their set, Dave and I headed home. We’re old people… two acts and we’re done! I caught up on some sports news… congrats to Tiger Woods on his comeback victory after knee surgery. Super congrats to Tom Izzo and Michigan State. If ever a state needed something to cheer for, it’s this weekend in Detroit.

Great weekend. Lots of good stuff cooking for this weekend as well.