Yesterday, we we went public with a decision to end Youth Ministry Exchange after about 5 years.

For the last couple of years it has been trickling and trickling… and so we figured, “Why not just have a celebration of life and let it pass now instead of letting it go from 200 members per day, to 100, to 20 (where it’s at now) to 10, to 5?”

I’m thankful for YMX and the hundreds of core people who made it a vibrant community. 200,000+ posts— yowsers! While there were a couple thousand members– there were 100-200 regulars who made it not just a forum, but a forum community.

Five years ago, about this time of year, I started to get an inkling of an idea that I wanted to create a new home for the defunct YS forums. There was a core group of about 20 youth workers who did an AOL group chat just about every night. And when YS closed their forums about 5 other forum sites popped up as substitutes… but none of them were run very well.

I talked to Kristen about it and she was kind of meh about the concept. “You don’t really know much about that kind of thing. And you really don’t know much about running an internet company.” Both were completely true but I took that as a blessing! Then, a few weeks later, I brought up the idea with Todd Porter after he visited our church. He got really excited– which added energy to the idea.

So, mid-November 2005, I put together a private chat with 5 people I thought were strategically the right ones to talk about this idea. That discussion generated even more energy. And in early December 2005, we were open for business.

As time went on, the company went about 1,000 directions as I tried various initiatives. Business plan? Um, I didn’t have one! How could I? I was still trying to figure out what I wanted to do with it.

From 2005 to 2008 we continued to grow… this was really the peak for YMX. We published a lot of user-generated content, we pushed out a regular newsletter, we had a podcast, the forums were vibrant, and some of our satellite sites were doing pretty well.

In truth, I had no idea what was next. I was learning a lot about business along the way but I wasn’t sure I knew how to navigate YMX past a new hurdle. Subscriptions were declining, interest in the web content was skyrocketing, and the site was struggling to pay the bills.

Thankfully, in June 2008, Youth Specialties stepped in and ended all the angst. They bought most of the web properties and hired me to come help them figure out how to bring some of the flavor of YMX to YS.

About the same time Facebook took off. Then Twitter took off. And forum communities hardly seemed to be the wave of the future that they once were. We infused some serious marketing efforts into YMX as part of YS. But it was obvious that masses of youth workers were going to flock to Facebook and Twitter while the decrease of interest in YMX continued to decline.

Certainly, there are those who think that the forums could have prevailed if I had focused more attention on them. I don’t value my presence there quite that much. I only had 4,000 of the 200,000 posts. Hardcore forumites know full well that in the last year or so I’ve largely turned the reigns over to Patti Gibbons and the rest of the moderator team. It just wasn’t humanly possible to do the work I needed to do at YS while maintaining things day-to-day at YMX. I heard the grumbles but couldn’t really do much about it. I think if those people saw the world from my vantage point they would have invested energy in the same places I did.

It was a two-way street… I was doing the best I could in my new role. And the moderator team did a great job ministering to the forums.

So, long-story short, we went public with the decision yesterday. It was a bit more sad than I expected. It truly felt like the end of an era.

It was a good era and one I’ll be fond of forever. 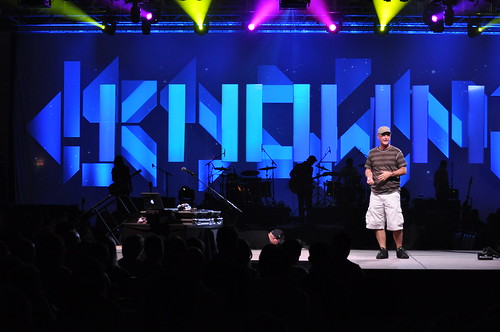 That’s just about the only word that can describe my heart right now. The last week at NYWC left me completely spent both physically and mentally– but I sit here now with my spirit soaring.

Back in December I had this silly belief that YS’s best days were still ahead.

Obviously, the people at YouthWorks who had just hired me to stay with Youth Specialties loved it when I said that… But for those who have been around YS for a while– that thought was almost offensive. People just politely smiled when I said it. You see, our history and the things in the past have been so great, that to even set the expectation that things could be better than the past seemed like I wasn’t honoring our past.

That’s just not true. My feeling was that the best way to honor what we’d done over the past 40 years was try to work hard to resonate with what we’ve always done well while taking everything else to a whole new level. I felt like it would be dishonoring to play it safe in 2010 and it would honor the past best if we looked at every tiny detail as an opportunity to innovate.

Fortunately for me, Tic and everyone else felt the same way. And we set off on this crazy idea of not just getting through our first year with new ownership, but using this as a reset point.

Even though in 2009 we had laid our heart out and finished feeling trampled, damaged, and hurt… we would learn what we could from that and lay our heart down again. Maybe we were masochistic? But we just had this crazy desire to keep trying.

9 months later– all that was left was to see if all of that crazy idealism could become a reality. Walking into last week I kept telling people, “I’ve got this feeling God has an amazing story to tell and I can’t wait to see what it is.”

All weekend long people asked me how the weekend was going. Then they proceeded to tell me all sorts of nice things about the weekend. All I could do was smile. Everything just felt right. The venue, the set-up, the affirmations flowing from the pours of the staff, the way the stage looked… everything.

You won’t get this grin off of my face for a few more days.

Over and over again Tic told us he wanted everything to be done in such a way where people who program for a living could just relax and know our team had everything handled. Hearing nice things tells us that people were shutting off their programming minds and just enjoying themselves. Phew.

For us, the evaluation process is just beginning. But based on what we heard and saw on site– I feel really good about San Diego. (We are all perfectionist, so of course we’ll tear it all apart and fix all sorts of minutia before Nashville.)

I was never more proud to work for YS than I was over the last 7 days.

The level of difficulty was exceptionally high. We had to navigate a new relationship with YouthWorks while at the same time trying to create an amazing Youth Specialties event at a time when youth workers desperately needed it. And some how it all came together. I know it’s not good to talk about pride in the Christian world… but I’m very proud of what we did this weekend together.

Call me crazy. Call me stupid. Call me whatever name you want. But each day I have to wake up and believe that our best days are in front of us.