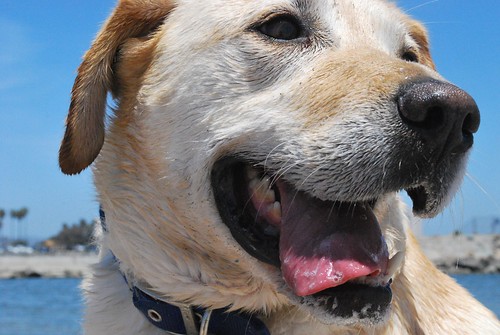 Today we took the whole family on an outing to dog beach. We all had a great time, but I think Stoney had the most fun of all.

Here’s a link to the rest of our pictures from the beach.

I’m still amazed at how much fun we can have in a weekend. It’s been since high school that I’ve had weekends off so consistently. Love it!

Friday night, we stayed home and rested. With temperatures in the 100s most of last week, the kids had been stuck in the house a lot. I’d even say that by Friday night they had a bit of cabin fever. Saturday morning, I got up early, did a little reading and writing, then took Megan and Stoney to dog beach.  It’s amazing how much fun we can have there. Stoney loves to play with his ball, but really he loves to socialize with other beasts. You forget that dogs are a pack animal until you let them hang out with other dogs. Stoney would like to be a dominant male… which basically means that he spends his time at the beach trying to get other dogs to submit to him. On Saturday, the funniest part was when two springer spaniel puppies spent 10 minutes messing with him. These 7 month old pups knew some of the rules of being submissive/dominant, but like adolescents, were playing with the rules. Stoney would chase one down and he would roll over to submit to some sniffs. While Stoney sniffed his belly, his brother would jump on Stoney’s back. Stoney would snap at the other and chase the other puppy. It was a riot. In the meantime, Megan and I enjoyed wading in the San Diego River. The crystal blue warm water was perfect. We could have stayed there all day… if Stoney didn’t want to chase and play with every dog on the beach we could have.

After a couple hours of beach time with Stoney, Megan and I took him home. We rested for a little while, had some lunch, then packed up the truck to go to the beach as a family. It was hot at our house when we left. Close to 100 in San Diego is twenty degrees warmer than normal. As we headed west towards the Pacific anticipation built up. To be honest, it was a tense drive! Megan and Paul were snippy with one another the whole way to the beach. Mom and dad were in that “head down, focus” mode! When we finally got to Torrey Pines State Beach we were ready to pour our energy into the waves.

As we gathered our stuff out of the truck to take to the beach Megan and I decided to lose our sandals. This is pretty normal and isn’t usually a big deal. But about 200 yards from the truck we were really in pain. It was so hot that I could feel the bottom of my feet burning, literally. Mom was able to swoop up Megan and carry her the rest of the way to the beach while I tried to trot there. It felt like I was walking on glass the whole way. When I finally made it to the beach the pads of my feet were covered in first degree burns. It’s hot! (They are now blistered up, yuck!)

We spent the next four hours playing hard in the surf. The water temperature was refreshing! And the waves were awesome by the shore and a bit scary at the break line. I had fun getting Megan and Paul on the boogie board by the shore. They caught little 2 footers and would ride effortlessly to the beach… like 50-75 feet in total. It was awesome! When they tired of that I’d head out towards the break line where the waves varied from 5-10 feet. With surf that big I got plenty of practice ducking the big ones. It felt so good to be in the water! I was able to watch the surfers from close up, chat with fellow boogie boarders, and catch the occassional big wave. It’s hard to describe the joy of catching a wave. It’s a lot scary as the wave is way more powerful than you… but completely exhilarating when you catch it just right and zoom along with the wave breaking behind you while you dodge tourists.

Exhausted, we left the beach about 4:30 and went out for pizza. It’s taken us a while to settle on a favorite pizza joint. Truth be told, San Diego has a lot of good cuisine but pizza is not their thing. When we go to Pizza Port, the pizza is good enough, the surf feel is awesome, and the kids love that they have machines to dump quarters into. While enjoying our pie we watched the local Chula Vista Little League team pound the Texas team to take home the U.S. Championship, it was good fun. We drove home, full and tired. Everyone was sound asleep by 9 o’clock!

Sunday morning, our small group decided to bring a little rejoicing to the church by hosting a surprise tailgate party. That was a great lead in to worship. I’m still lost in the idea that we celebrate sports figures but not religious leaders… it was fun to mix those two things up intentionally for a morning. I think it was a success.

After church, we went home and chilled for a while. We watched Chula Vista win the Little League World Series (woot!) and then went to Maddie’s 3rd birthday party. All of the church staff has kids about the same age, so it was a blast to see all the little kids party and dance together. Megan and Paul… were awesome in playing along with a “little kid party.” They really did have a good time. And it warms my heart to see that they feel like they fit in. The whining about leaving Michigan… finally dissapating.

From there, we went home and embraced the quiet. The kids convinced mom to allow them to camp out in the living room. They were in bed early and mom and dad retired to read and go to bed early.

I think it takes someone who never really got weekends off to really appreciate the simplicity and joy of a weekend off. Then again, I think everyone loves weekends and I’m just finally getting to join in!

Next weekend, college football. That makes me super happy.

It’s amazing how fast the last few weeks have gone. It just seems like every time I turn around I’m here talking about what I’m listening to on a Saturday morning! Last night, we took the kids to Gio’s in La Mesa for our family date night. Then, they came home and everyone crashed by about 9:00 PM. This morning is normal Saturday morning stuff. We had waffles and coffee and in a little bit I’ll take Stoney over to dog beach so he can run around and play with other dogs. Kristen is pretty occupied thinking about our move, which starts in just 8 days!

Here are the next 10 songs I’m listening to this morning. Completely random, my ratings included.

9. Amazing Grace My Chains are Gone by Chris Tomlin ****