Remember: Discouragement does not come from the Lord. When you’re onto something our enemy attacks. The closer you get, the more you can expect to be attacked.

This clip from Tin Cup highlights the differences between an amateur and a tour professional.

Whether you are a casual golfer or a week-to-week preacher in a church. You and the guy on tour are fundamentally different in how you approach your craft.

What you do is similar! But how you approach it and how it’s carried out are completely different.

As the movie shows, the tour pro takes calculated risks, repeating the same simple winning swing over and over again, week-to-week, tour stop to tour stop.

Whereas the casual golfer, even the aspiring professional, has to take greater risks to see lesser rewards, often swinging wildly and taking big risks in hopes that it’ll pay off.

Having been around PGA and Champions Tour players as a tour volunteer I know that there are a lot of differences between their game and your game.

I’m a 12 handicapper on my own. But I guarantee you that if you put me on that stage, in those conditions, with that practice… I’d look a whole lot better than I do normally. Give me a week with those set of circumstances and I’d break 80.

It’s not that they don’t have skill or talent. It’s that their skill has been put on display in the best possible conditions for them to look good. (They would argue that they rose to this spot just like everyone else. Sure, they take advantage today. But they got to that point with nothing but hard work and rising through the amateur, college, and mini-tour ranks. Fair enough.)

It’s that the game they play is similar, but completely different from the game I play with my friends. It’s set up for them to look good.

A lot of times we go to a conference, camp, retreat, or a convention and we see a tour pro on their best day, in the best conditions, absolutely NAIL a talk. And we walk away thinking… “Why do I even bother?!? I’ll never be that good. Why not just buy that dude’s DVDs and play them at my church each week?”

But before you get upset or lament realize this: The talk you’ve just heard has likely been delivered dozens of times. It’s been critically reviewed by an inner circle. It’s been refined, they know when to drop what line, they know how to adapt it to your setting. They have only booked themselves at events they know they’ll play well to. The lighting, sound, and environmental conditions are tailored to their strengths and weaknesses. A professional band set them up. Someone else introduced them. At best, their talk has 1-2 calculated moments of risk.

It’s not that they are better than you. It’s that given the conditions their talents are amplified and you’re able to see them at their absolute best.

In the end… the act of speaking at a conference is similar to what you do on a week-to-week basis, but completely different at the same time. They are only thinking about that talk. They didn’t drive the van to the retreat. They don’t have to give a new talk each week. On and on. It’s completely different from what you or I do on a week-to-week basis in our ministry.

Here’s the fun part: Just like in the movie– you could tell that the tour pros got a kick out of the caddy hitting the big shot on the big stage. There’s a little glimmer in their eye when you take a big risk. They kind of wish they could do it, too.

Last Sunday, I wrote about some of the discouragement I was feeling. Anxiety. Self-doubt. Questioning my abilities. Questioning decisions I’ve made. Paths I’ve chosen. I wish I could say that was just a moment of self-doubt and second-guessing. And I wish I could look back on that 7 days later and laugh.

But I can’t. It seems I’m passing through a little season of discouragement.

It is completely antithetical to reality. My head knows it but my heart doesn’t seem to care.

As I look out my window right now, the Eastern sky is about to burst with the morning. With the blue sky to later burn through the morning mist– I’m reminded that discouragement comes from Satan.

3 Ways I’m Dealing with this Season of Discouragement

Here’s the excerpt that made me smile this morning. I love when my 2005 self preaches to my 2011 self: 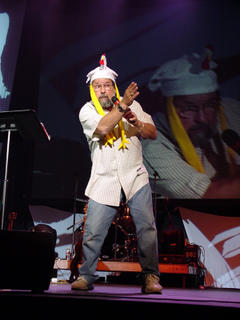 How come so many youth workers look up to Mike Yacanelli, but when it comes down to it… They don’t have the balls to live like him? They read his books, they chuckled at his joke “I am the pastor of the slowest growing church in America” but they wouldn’t ever put themselves, their talents, their families, or their reputation in that situation. Let’s face it, a lot of youth workers out there HAVE EGOS THE SIZE OF THEIR YOUTH GROUPS. They are snobs who wouldn’t ever want to work with broken and busted churches. They hear what church I work at and head for the hills because we are too small, too broken, and can’t offer them anything of value. So the reality is, that they are in ministry for themselves and not for others. They have been trained and are getting experienced so that they can have easier jobs with more stuff and less problems. The concept of “others first” or “do unto others as you’d have them do unto you” is foreign to them. A lot of the “big guys” I know have bought into and perpetrate the lie “bigger is better.”