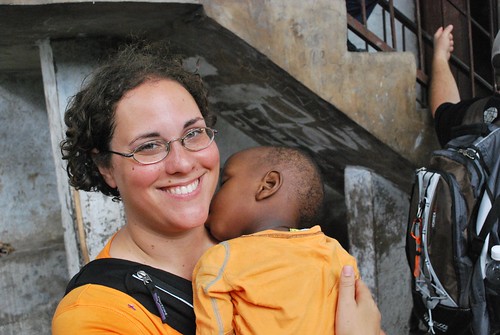 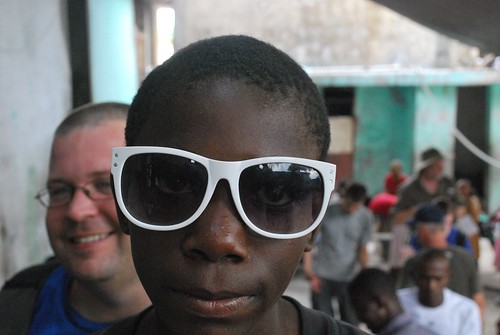 OK, so in order to really appreciate this video you need to know that Kristen has no moves whatsoever. She loves music. She actually likes to dance and clap to music. But the poor woman… well, she has no beat. And this has long held her back from sharing her dance-worthy moments with the general public.

But put her in an orphanage full of children filled with joy– no problem!

Saturday afternoon most of the team pealed off to go to do VBS and I just felt like I needed to make one more little trip to the Sons of God orphanage. I wasn’t sure why. It was just in me and I needed to do it.

As we made our way through the series of dirt streets from Pastor David’s house to the orphanage I was just asking God… please, show me your forgotten child. I was praying for just a moment of connection with a child to let him know that Jesus is there for him. I didn’t have a clue how it’d work. But that was my prayer.

We opened the green heavy steel gate and wound our way through the Pastors house to the little courtyard the children hang out in. Of course, 3-4 visitors from America drop in and every kid just comes to hang out.

Within a few minutes I was carrying around a little two year old boy… the same one who attached himself to Kristen on her visits there. My heart melted as the warmth of our bodies created a silent bond of sweat. (Older kids, about 6 years old, put the younger ones on their shoulders to bring the babies to you to hold. It’s sweet and scary at the same time!) As I held one boy, another would poke me in the back of the leg and go hide. He and I would lock eyes and he would run off to another place. And so, in this tiny little courtyard filled with children and carrying a two year old, I began to play a game of poke/chase with this older boy. (About five years old) It was cute to see his smile and the joy he got from being chased by a fat white man.

About 15 minutes of this go by. I’m laughing, he is laughing, the baby boy is laughing as I bounce him around, and my back is aching. Eventually I decide I can’t bear the pain of it any longer and sit on the steps leading into the main house.

The little boy who had alluded me while playing chase just sat down next to me and leaned against by big sweating body. He touched my head, bald and sweaty. He felt the hair on my arms. He kept leaning against me. It was a sweet moment. Then he took his t-shirt, filled with holes, and gently squeegeed off the sweat from my arms. It was tender and loving and I hoped a ball of sweat would land in my eye so I could release the tear building up.

As I rested and played with the antsy baby he and I just shared a moment where we were in one another’s presence. No words were shared… we just were together and silent among the swarm of activity.

Suddenly, he got up and went inside. We were sharing such a moment that I didn’t even think it was odd that he got up. He just got up. About a minute later he came back out of the house and sat right next to me… just like we were before. Except he had a picture.

When I saw the picture I lost it. Sure, I didn’t weep outwardly. But I wept inwardly and only allowed that one Cherokee tear to trickle out. I held those tears in for me. But maybe I also just held it together for him?

He reached out his arms and showed me a picture of his parents. It was worn and torn. It was faded. And whoever took the snapshot had somehow clipped off the top of his fathers face.

The photo was of his parents wedding day. The bride beaming, the husband standing proudly next to her, and the table before them filled with foods and a 3 tier wedding cake.

I understood. He understood. These were his parents. He was orphaned. His heart longed for a day when one of them would walk through the doors of the orphanage and take him home. And that day may never come.

And so, he and I sat, staring at the picture.

God answered my prayer in that moment. I don’t know why I felt like I needed to go to the orphanage that afternoon. But I did and this was why. As the little boy and I shared our presence he was able to know that he was not forgotten. Perhaps his parents had abandoned him or perhaps they had died… but he held onto hope.

The truth is that the orphanage scared me to my core. I never had it perfect as a kid but I always had a loving home to sleep in. My parents loved my brother and I. We never doubted it. And we both knew they would never abandon us. Through the toughest of times they took care of us before they took care of themselves. I never felt the way this boy felt. My empathetic pains were merely hypothetical. I couldn’t fathom his pain. But I could rest in the presence of sharing that moment with him.

One of the most biting things ever said about me was a pastor, early in my church experience, who said from the pulpit one morning, pointing right at me and asking me to stand up so he could use me as an illustration of his point, that he and the elders had labeled me a “spiritual orphan” in the church.

Those words punched me in the chest and I don’t know if I have ever recovered from that pain. I felt like I was part of that church community and they merely looked at me as an orphan. I knew those words didn’t reflect the words of Jesus… and yet I knew that I would never quite fit in again in that kind of church.

Perhaps, at the very core, that is the thing deep inside me that looks at the evangelical church and says… somewhere, deep at the core of who we are as a church… we need to reform?

You see, we are all spiritual orphans. We are all adopted by Christ.

Without the love of Jesus, we are all like that boy in the orphanage. We all are looking for a moment of presence. We are all holding on to an image of what a reconciled life will look like.

May we never let go.

Those were the words of my friend and teammate, Mark Helsel.

Our team was overwhelmed today as we joined in the craziness of an orphanage running in the backyard of a doctor turned pastor.

Today we got a glimpse of an amazing ministry here in Carffuer, the Sons of God orphanage.

What is it? Well, it’s nothing and everything at the same time. Upwards of 100 children live in a makeshift orphanage. The conditions are very rough. It’s messy and smelly in the backyard where the kids play. There are chunks of broken concrete and piles of mud. Little boys urinate in a drain next to workers doing laundry.

But this isn’t about the squalor of the conditions. It is about the condition of their spirit. The children all wear huge smiles. They are warm and affectionate. They are clearly loved and safe. And thanks to the efforts of people like Ed Noble (Journey Church, La Mesa) and Doug Paggit (Solomons Porch, Minneapolis) they have plenty of food and supplies.

This is what joy is! It is knowing that you are an orphan and have been brought from life threatening danger to life giving security. That’s why, when the singing begins, so does the dancing. Joy erupts from the very fact that you are loved and taken care of.

Oh, to be a person that opens your home, life, and family to the needs of your community! What satisfaction and honor that must bring to the family in God’s eyes.

Maybe, just maybe, this is what the church ought to be doing?

A refuge in life’s earthquakes.
A family when you have none.
Security when you are left insecure.
A future where there was none.
Sharing to the point of poverty.

I’m now back to the place I was in February. I simply cannot reconcile the world Iive in with the world I know exists here.

That’s why I leave you simply with the challenge.