END_OF_DOCUMENT_TOKEN_TO_BE_REPLACED

When my family moved into the College Area 3+ years ago we had no idea how much impact San Diego State would have on us. We just knew that we were going to embrace SDSU because it was the neighborhood we live in and we always have hopes of being Good News wherever we live. (Yes, being season ticket holders is being Good News… right?)

What we didn’t know is that in these 3 years the entire university has begun a transformation no one could have anticipated.

In 2009, the major news story on campus was about a campus-wide, one semester ban, on the consumption of alcohol. (Including on campus fraternities and sororities.) There was concern about how this rule would impact the school’s Playboy’s Top Party Schools ranking and the economics that went with it.

SDSU was a party school and defined by it.

Truth be told SDSU is still a party school. It’s a fun place to be a student. But partying is not the first thing people think about anymore when they hear SDSU anymore.

San Diego State is currently the most winning college in major sports. Football had back-to-back 8-4 seasons. Basketball was 34-3 in 2011 and is currently 20-3.

Winning has redefined campus. 3+ years ago you saw far more frat/sorority t-shirts than SDSU gear. Now, most students rock SDSU gear multiple times per week. Each home game 12,414 pack into Viejas Arena to cheer on the basketball team. Last year saw a huge increase in student involvement at football games. Students aren’t just coming to campus to party anymore. Now they want to be part of The Show.

Increased interest has created a groundswell of students trying to get into SDSU as their first choice. Consequently, the admissions standards have gone up, making SDSU more and more of an academic school beating it’s “fall back school” reputation.

As the video shows, winning also transformed the type of student-athlete SDSU attracts. Tim Shelton has been on campus long enough to see this transformation first hand. It’s obvious to point out that this transformation is part of his legacy. Steve Fisher, SDSU’s Hall of Fame-bound coach, sometimes refers to Tim in press conferences as “coach.” Tim has lots of talents and lots of influence on campus and with his teammates. (Case in point, Tim wrote and produced Aztec Motto, the video played during pre-game introductions at home games.)

So what is he doing with his talents and influence?

Winning attracts winners and Tim Shelton is a winner.

Get daily updates via RSS or email. It’s quick, easy, and free. I missed the two exhibition games. (Which makes me a bad season ticket holder) That said, Megan and I made it to the season opener last night at the Viejas Arena.

Bryant College wasn’t exactly a great opponent, which was good because the Aztecs weren’t really ready to play. The first half was defined by their lack of cohesiveness. That makes sense because Chase Tapley is the only returning starter. On top of that two other starters missed the game, James Rahon with an ankle sprain and Jamaal Franklin served a one game suspension for a suspected DUI arrest over the summer. Looking up at the halftime stats I thought the scoreboard was broken! They shot 39% from the floor including 25% from the free throw line. Somehow they still rallied to take the lead, 27-26 at the half.

But the Aztecs came out of the locker room with a new attitude– an attitude I expect them to express for the next 25 games. Unlike last years team everything isn’t going to work. In 2010-2011 it didn’t matter what the game plan was because they were better at every position than most of their opponents. This year is different. With only 8 scholarship players they are going to have to take advantage of what the opposition gives them. Last night, they were ice cold from the 3 point line. (0-12 at one point) So in the second half they crashed the boards and shot a very respectable 79% from the field.

I couldn’t get over the fact that almost none of the players who got time on the court last night would have played significantly last year. There is no player as dominant as Kwahi Leonard was last year, not even close. (I wish he’d stayed another year, especially with the NBA lockout) But that doesn’t mean that they can’t play together as a team and win 25 games to win their conference. It will all come down to gelling as a team.

Last night the gelling of this basketball team happened during the second half. before our very eyes we saw a team go from gym scrubs to DI college basketball. Their non-conference schedule is substantially more difficult this year than last. (No one wanted to play them last year!)

I’m from Indiana. A big part of my childhood involved playing basketball in driveways.

From the time the ice melted until we could hear the band playing and crowd cheering from Notre Dame stadium all we did was play basketball. We’d get off the bus and play 21. We’d have breakfast on Saturday then play 21 until lunch… followed by 15-20 more games of 21 until dinner.

When we could get 6-7 people together we’d play half court, make it take it to 10. Usually, it was 3-4 guys playing 21 until our fingers cracked or palms were white and the rest of our hands were black with dirt.

Everyone in the neighborhood knew everyone else’s moves. They knew who to guard from outside and who to push to their left hand in the lane. We knew who had an unstoppable jump hook. And we knew who couldn’t make a layup. There was even a kid so good at free throws that we had to make a new rule, after 7-check-up.

But the biggest rule of them all? Put up or shut up.

It never failed that the kids who didn’t play very much ran their mouth the most about how good they were. You’d hear them in the hallways at school trying to convince everyone that they could play. And you’d hear them on the bus all the way home.

Then we’d all get off at their stop, take their ball out of their bushes, roll it to them and say… Put up or shut up.

We’d call their bluff. Maybe they really could play? But usually not.

What does that phrase mean? Simply put, let your actions speak for themselves. It’s easy to run your mouth and tell people how good you are. But can you deliver?

In my neighborhood the best players didn’t have to tell people how good they were. They let their game speak for itself.

And chumps like me? We just kept out mouths shut.

All talk, no show

And sometimes I just wish we were back in middle school so I could follow them off the bus, go fish the basketball out of their bushes, pass it to them and say “Put up or shut up.”

Looking in the mirror

My dad says a phrase that I think about all the time, “Don’t write a check that you can’t cash.” I think about that a lot. Especially when I run my mouth about what I can do, want to do, or should do.

Church leadership culture is quick to celebrate the person with the loudest megaphone who says the quote worthy thing that gets retweeted all over the heavens.

That’s a whirpool of “put up or shut up”  that I want no part of. Eventually, someone is going to ask them to cash that check.

Instead, I’d rather just keep my mouth shut and do my best to let my game speak for itself.

Everything I’m doing from Thursday to Sunday is measured by the following questions: “What  time does ___ start and who is playing now?” I love March Madness!

And all of those basketball dreams lead me to this list:

The Four Greatest Basketball Movies of All Time

Agree? Disagree? What is your favorite basketball movie of all time? 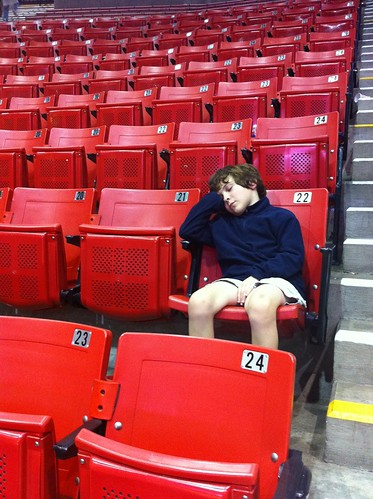 Yesterday was the perfect example of why they are so good. They traveled to New Mexico to play in an arena called “The Pit.” It’s a notorious place to play. They were down early- the starters were plagued by whistle-happy refs. With three of the starting five on the bench, the Aztecs roared back on a furious run which ultimately held on at New Mexico. The simple fact is that they have 8 legitimate starters in a league where most teams have 3. They get stronger as the game wears on and eventually own their opponents.

Is this team as good as the Fab 5? Probably not. We will ultimately find out in March. Before that they are hungry for a conference title, then trying to repeat as conference tournament champions.

If you get the chance, watch a home game on TV. (I’d say go to the game but I think all of the tickets are now gone!) What you will see will rival anything you will see at any of the big programs in the country. It’s loud, it’s festive, it’s fun. And it’s starting to look like an impossible place to play.

This is a mash-up, but whoa. Awesome and true. Lebron isn’t the king of anything.