Last night, we dropped a bucket of chum in the tank and ran away.

Back in December we introduced Inductive Bible Study at our winter retreat. It wasn’t anything fancy– in fact I thought it was a little cerebral for a retreat. (This coming from a guy who did a high school retreat based on the spiritual disciplines of Richard Foster!) We broke up into groups, each team given a part of a parable, we tore into it, and came back together a little later to share what we’d learned.

In my group a key moment happened when we were studying the parable of the sower. One of the guys in my group had been a little frustrated… “Why did Jesus teach in riddles like this? Why didn’t he just tell them what he wanted them to know. This is so confusing” Another person in the group looked at another part of the parable and said, “I think it’s like rap music. Jesus was speaking to people who understood the words like he did, but people who didn’t get, he wasn’t talking to them.” (Maybe Kanye and Jesus really do have something in common?) 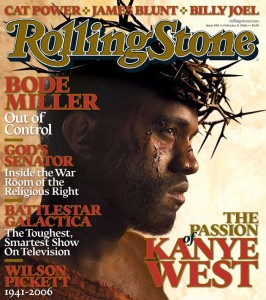 When our leadership group met a couple weeks later, the students told the adults… “We don’t want you to lecture us. Instead, teach us how to study the Bible on our own.”

Collectively, our  heads tilted 10 degrees to the right. We didn’t see that coming.

Last night my task was pretty simple. Get the students thinking like investigative reports. Questions, questions, questions. Ask the text lots of questions. And get them to grasp that in Luke 1, Luke was setting out to do the same thing we were asking them to do. “Put the story in order so it makes sense.”

I created an object lesson where each student received a sealed envelope, each envelope containing a fragment of a vaguely familiar story, and they had to piece it together, chronologically, in three minutes. They were frustrated, some gave up, and in the end they didn’t quite get it in the right order.

They saw that putting a vaguely familiar story together in chronological order was a nightmare unless  you took the time to carefully examine every fragment.

After we read the worst rendering of ‘Twas the Night Before Christmas in history I gave them the background information they’d need to understand why the Gospel of Luke was written. Theopholis, either a new believer or an investigator of Christ, had likely hired Luke, a believer and doctor, to go back and document what actually had happened. He’d find witnesses and put together the story to document an orderly account of Jesus’ life. (Luke 1:3) There were all sorts of fragments, little letters, floating around. But someone had to put all the pieces together so that the story would stand up to histories glare.

From there it got noisy as students went into their groups.

Group time was disorderly. It was messy. Loud. All over the place. Markers coloring. Pens circling. And the group leaders had to poke and prod to move things along.

But students were asking questions of the passage. Good questions.

At the end, when we shared what we learned, I think students were left with more questions about Luke 1 than answers. And that’s a very good thing.

I closed our time by asking them what this passage had to do with them. Those dots had not quite gotten connected… and that’s OK.

As we cleaned up… the leaders were exhausted. I could see it on their faces. What have we gotten ourselves into? We really had to work hard to keep it together. But I was left with a few thoughts of encouragement.

These are words I’d use to describe unleashing a feeding frenzy of God’s Word on our students last night.

One response to “Unleashing a Feeding Frenzy”